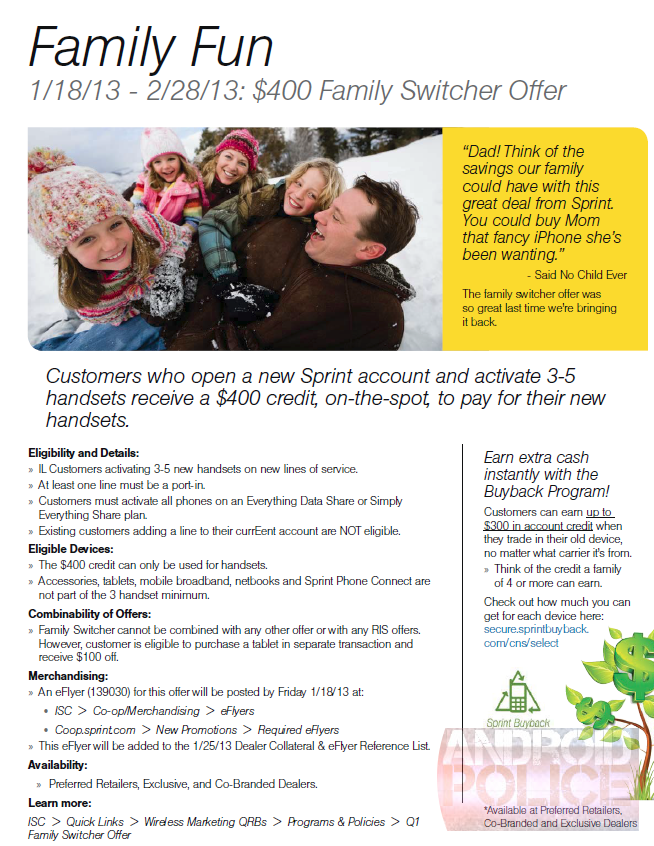 Who doesn’t love free money? According to a leaked internal Sprint memo, the company will be offering new customers a $400 device credit for bringing over at least three lines, as part of a new family plan. The promotion will last through the end of February, and is apparently compatible with any other offers that Sprint currently has on the table.

Granted, this isn’t exactly free money, in case you want to argue semantics. You will be locked into the standard two year contract, and a family plan will end up costing you a pretty penny. However, if you’re not adverse to new contracts, and you have decent Sprint coverage in your area, then this certainly isn’t a bad deal – Sprint is, after all, one of the cheaper options out there.

Reading the fine print, it looks like only one line actually has to be ported in from an outside carrier. You can also get up to five lines with this offer, but the $400 won’t go up if you go over the minimum of three. And, as always, you have to be individually liable for your line, although employer discounts are still fair game.

This is a great way to pick up a lot of fancy new smartphones without having to pay a pretty penny … so what will it be? The HTC EVO 4G LTE? The newer Samsung Galaxy Note II or Galaxy S III?