With the loss of my HTC10 I was on the market for a suitable camera to replace it. After a fair amount of searching and recommendations all the way up to full frame SLR cameras I finally settled on a diamond in the rough. Z-cameras E1 is a Micro 4/3 camera with a form factor not much larger than a gopro.

Firstly I’d like to apologize, my photos got sent back to 2014 with the loss of my HTC10. Getting back to the E1 we have an absolutely undersized device for what it promises. Taking a look around the front of the E1 is completely dominated by a micro 4/3 mount also on the front is the power button and microphone holes. The left side of the camera contains a surprising array of ports including a 3.5mm jack for audio input, HDMI output, power input, USB(for data only) and an I/O port. The I/O port is designed for a variety of uses one of the more interesting being setting up multiple cameras for a bullet time rig. The rear of the camera is primarily comprised of the screen and a series of buttons used for navigating the on screen menus.

Micro 4/3 is one of the more recent developments for interchangeable lens cameras. Cameras using this lens mount are mirroless leading to reduced physical size and weight compared to a traditional full frame DSLR. The sensor however is smaller than a traditional 35mm sensor with a crop factor of two being needed to calculate the equivalent lens size. Micro 4/3 cameras generally outperform their DSLR counterparts for video which is exactly where the E1 is targeted. Although micro 4/3 cameras are generally considered inferior to full frame DSLR cameras they still massively outperform things like smartphones and typical point and shoot cameras. 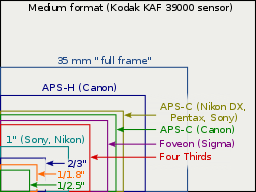 I made a mention of full frame as a reference point for what exactly micro 4/3 is. Quite simply full frame is a sensor in the same form factor as traditional 35mm film. As you can see above there are a variety of sensor sizes available on which micro 4/3 is the first of the “big” sensors. For two sensors of the same resolution the larger sensor will have larger pixels and if all else is equal this will directly translate into improved performance regarding low light. The counterpoint to this is that larger sensors simply cost more as they take more silicon, this is part of why micro 4/3 and APS-C/H cameras generally cost less than their full frame counterparts.

I could probably write an entire article on lenses alone. And Pocketables will be looking at lenses indepenent of cameras in the future since micro 4/3 has a massive array available to it. Although “Young” in the sense that micro 4/3 hasn’t been around as long as some cannon or nikon systems(which date to the 1980’s for electronic variants) the standard has been around for 10 years offering time for a still growing variety to be made avilable.  An incomplete list is available online. For our review of the E1 Sigma was nice enough to provide both a 19mm and 30mm lens. I also sourced a 35mm manual lens from meike.

Although not built for it the E1 does take excellent photos. This is one area however where it’s small size is to its detriment. Electronic lenses, like the ones sigma sent us don’t have on lens focal length control leaving the user to go through the menus which although functional are slower than a dial. Manual lenses like the meike do help avoid this. The presented sample photos are outdoor sets with a variety of depths presented. These were taken using the Sigma 19mm and 30mm lens as the Meike lense did not arrive in time for testing.

Video is the E1’s bread and butter. Unlike photos video is exactly what it’s built for. I took advantage of it’s wireless capabilities to put it up on a mono pod 10′ in the air and take some panning videos across the landscape while I was on vacation. The electronic capabilities of the sigma lenses were a massive advantage here as I could make adjustments without bringing it back down to tweak. Although the video is clear you can see one hole in the feature set of the E1 being any lack of in body stabilization. This can be compensated for with some lenses, Panasonic in particular makes lenses with stabilization built in.

What about that bitrate?

This is honestly the biggest current weakness of the E1. It’s reliance on microSD storage media and usage of a UHS-I cards limits it to 104MB/s per the bus with a practical limit of 90MB/s for most cards. Possibly to avoid running into that(or due to other concerns) the highest bitrate the E1 can manage is 60Mbps. That’s a lot lower than professional gear which can easy reach bitrates of 300-400Mbps if not much higher for 4k formats like CinemaDNG or Prores. Youtube(where a lot  of people using the z-cam E1 are likely to upload their footage anyway) suggests upload settings of  35-45 Mbps for video under 30fps and 53-68 Mbps for 4k footage topping out at 60fps. Since the E1 doesn’t shoot HDR(most stuff doesn’t) we’re not going to worry about the HDR bitrates. With the E1 peaking at 30fps 4k while we still want a higher bitrate it shouldn’t hurt it if you use it properly.

The app provided for the E1 is nothing short of amazing. With complete control over every setting on the camera as well as a live stream of what it’s seeing via WiFi. I’ll apologize for the gallery size but basically everything you could think of. Various video modes up to Cinema 4k and down to 384p240 and important steps in between including 4k30, 1080p60 and 720p240 for slow motion. Shutter angle for controlling flicker and options for color like Log are available. I could probably write an article of it’s own going over everything that’s in the app but suffice to say every lever you could think to tweak is in there somewhere. It is stable and in general well laid out save for hiding the iso(something I hope gets corrected in an update soon)

Simply put for anyone that needs a step above what their phone is capable of. Without breaking the bank purchasing professional grade equipment the E1 is an excellent step. For people who may move into higher grades of production later one the E1 shares it’s lens system with popular cameras from Olympus, Panasonic and Black Magic as well as others allowing the reuse of lenses, and continued use of the E1 as a secondary camera. Still photos although a weakness due to limited controls are still more than competent on the E1 once again managing to put phones to shame. Electronic lenses are great for remote work, and the ones Sigma lent us were absolutely fantastic. However manual ones are far more convenient for “run and gun” usage. At 250 on B&H or slightly more on amazon for the offered features it’s an absolute steal.